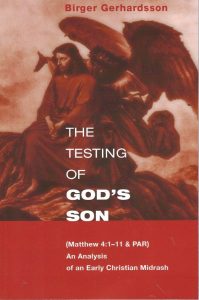 Gerhardsson in The Testing describes the origin and meaning of the testing of Jesus by Satan as recorded in the three synoptic gospels. He notes there is a short version of the narrative in Mark and longer in Matthew and Luke. He reasonably suggests we have two versions of one and the same tradition, both based on Deuteronomy 6-8. He suggests it is a haggadic Midrash and uses the Matthean version for his study. He relates how God allowed his “son” Israel to wander for 40 years in the Wilderness to discipline and test him. The author describes an early Christian Midrash.

He begins by describing Midrash that begins with Scripture, accepted as authoritative and sacred, a new text is drawn out with the help of every possible association of ideas. He sets out to clarify and demonstrate how a Midrash arose in the church during the 1st Century AD through a detailed analysis. He begins by describing the multiple locations in Scripture where God is seen as a Father to Israel to set the stage describing Israel, the son of God in the wilderness.

He explores the designated Greek word to “test” from the Hebrew (Deuteronomy 8:2) and concludes it contextually means “a testing of a partner in the covenant to see whether he is keeping his side of the agreement.” He explores in Scripture how God tested Israel but man is not to test God (Deuteronomy 6:16) because he has already given proofs to his covenant son of his divine power and faithfulness. Among other passages cited the author cites Deuteronomy 6:16: “You shall not put the LORD your God to the test, as you tested him at Massah.”

He then states the second temptation must be seen in this context and that Satan wanted Jesus to tempt God to endanger his life so that God would save it pointing out the connection of Deuteronomy 6-8 with Psalm 91. Jesus quoted Deuteronomy 6:16, “You shall not put the LORD your God to the test.”

He points out that not only are Jesus’ three answers linked to Deuteronomy 6-8 the subject matter of the temptations and the details of the setting are similar to both.

He brings in Jewish thought from Midrashim, the Mishnah and Targums. It is unfortunate he ends with chapter 4 but alludes ending in chapter 11, with 7 chapters evidently never published.