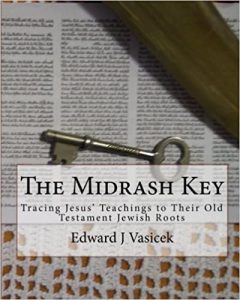 Pastor Vasicek’s contention in “The Midrash Key” is that the 2nd Century Church threw away the key to interpreting some of the nuances of Scripture-based partly on anti-Semitism and that affects our interpretation of the New Testament. Religious artwork inaccuracies serve as a visual object lesson showing that lack of knowledge of 1st Century Judaism contributes to ‘missing the mark’.

He proposes that much of Jesus’ teachings are midrashic from Deuteronomy but paradigm blindness has kept us from realizing Jesus’ teachings are rabbinic in nature. Vasicek asserts that Jesus’ Sermon on the Mount is a Midrash of sections of Deuteronomy (primarily) and Leviticus and relates historical facts though he doesn’t elucidate the mechanics of Midrash to his assertions. Rather it appears from his presentation that at times Jesus was commenting on previous Jewish commentators from Bet Hillel and Get Shammai camps, and he notes some similarities between Jesus’ teaching and Jewish Sources such as the Talmud. He does admit his look at Midrashim is brief.

He compares Deuteronomy 8:3-18 with Matthew 6:24-34 for example, which very well may be the Source Text (he calls it the “mother text”) and the Midrash but he provides no mechanics or tools for the reader to come to their own conclusion. It is important to note that Pastor Vasicek does place emphasis on the Hebrew Scriptures, the Tanakh (he calls them the ‘First Testament’). He compares Matthew 5:48 with Deuteronomy 18:13 which some would say is a quote. Again the mechanics of the quote woven into Jesus’ teaching is not expounded upon.

The author has made some observations worth noting. He recognizes that a commentary may come from two sources. He labels this as a “double Midrash” (p. 88). I have labeled this as “overlaying Midrashim”. He also spends time explaining Jewish customs that the reader may not be familiar with, particularly in some lengthy footnotes but also within the text. (He provides 350 footnotes.)

Vasicek doesn’t limit his discussion to the Sermon on the Mount but also mentions Peter’s (1 Peter 4:8) ‘Midrash’ on Proverbs (10:12b) but again does not include any of the mechanics of Midrash. But he does make a great point that the same text from the Hebrew Scripture can provide a different Midrash regarding two different subjects.

Finally, Pastor Vasicek makes a laudable effort to bring Christians into the Hebrew Scriptures, the Old Testament and to understand the Jewish background of 1st Century Christians and that preaching should be done in “couplets” including passages from the Old and New Testaments that parallel each other and that further research and study is necessary regarding Midrash in the New Testament, particularly in Jesus’ teachings.