Vasicek, Edward J. The Amazing Doctrines of Paul as Midrash. 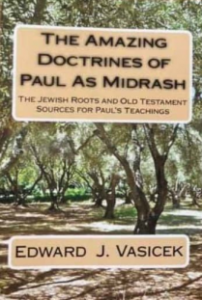 The Jewish Roots and Old Testament  Sources for Paul’s Teachings. Midrash Detective Publications, Kokomo, Indiana, 2014. In Vasicek’s second book, he again contends that the 2nd  Century Church threw away the key to interpreting Scripture because of anti-Semitism. He asks, “What would the original  recipients fluent in the Old Testament have understood?” He asserts that by locating the text in the Old Testament Paul is expounding upon, we can increase the context and gain an accurate understanding of what Paul is saying. In this volume, Vasicek gets into the mechanics of Midrash somewhat by describing three of Hillel’s principles and noting the importance of the Septuagint. Again he matches  up Old Testament and New Testament Scriptures:

For example, he links 1 Corinthians 15:3-4 with Isaiah 53. But is 1 Corinthians a Midrash of another book of the Tanakh and Paul comments on Isaiah 53 linking that book with it thus increasing the understanding of both by his Midrash in 1 Corinthians? That is a mechanism of Midrash and it seems ‘The Amazing  Doctrines…” is not quite finished yet.

Again, as in his first book Vasicek weaves in comments from well-known Jewish sources. He mentions  Hillel’s instruction to connect (link) Bible passages when common words are used, “G’zerah Shavah”, that in the Jewish mind would trigger a correlation. Pastor Vasicek weaves comments by Jewish sages into his treatise. He talks about the literary device of chiasm and points the reader toward the groundbreaking book by David Dorsey, “The Literary Structure of the Old Testament” (Baker Academic, 1999). He then tackles End Times Eschatology and weaves in Jewish thought which begs the question, “How did  the Jewish sages arrive to their thinking about End Time, i.e., what are the mechanisms of Midrash?”