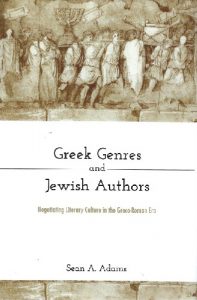 Adams’ book is an historical investigation of the ways that Jewish authors engaged literary culture and constructed texts, that is, Jewish literature written in Greek, participating in the historical, geographical and rhetorical world that it is situated providing constraints for the scholar realizing the compositional plasticity of literature. The author points out the “crossing of genres” incorporating elements from the “guest” genre while retaining the framework of the “host” genre creates literary diversity at times blurring genre distinctiveness or developing new literary expressions. A text could participate in a plurality of genres as well using prototypical models from them and recognizable patterns. The strength of his treatise is the presentation of differing viewpoints, comparisons and the substantial number of annotated footnotes and references. He does not cover the Jewish genre of Midrash.

He begins examining Jewish epic poetry of Philo Epicus, Theodotus and Sosates, Only 24 lines remain of Philo’s work On Jerusalem’s. His use of hexameter, the prescribed meter for epic and his Homeric vocabulary indicate a higher degree of Greek education. He brought Greek and Jewish theological ideas into contact with each other with “purposeful obscurity” carving out a space for the Jewish ethnic group within the Greek literary culture. Theodotus’ eight preserved fragments of On the Jews show he exhibited the Greco-Roman practice of attributing the founding of a city (Shechem) to a particular deity taking the dominant culture’s position rather than his own people’s history. His vocabulary is also Homeric. His use of a Jewish story for an epylion “joins the Jewish cultural perspective with Greek literary practice”. Sosates, “the Jewish Homer” has no surviving work, only a brief reference to him and he wrote “a Homeric epic celebrating the Maccabean conquest.”

Adams also reviews other Jewish-Greek poets: Ezekiel the Tragedian, Pseudo-Orpheus, the Sibylline Oracles and pseudo-Greek poets. Ezekiel’s tragedy Exagoge with its 269 preserved lines written in iambic trimeter retells the first fifteen chapters of Exodus recasting the LXX translation for the work although not ignoring the Hebrew. He is the first known author to write a tragedy on a story from Scripture heroically depicting Moses although there is no reversal or recognition showing fidelity to the biblical text and the identity of his people. Nicolaus of Damascus, while not a Jew, composed a play about Susanna, and was the only Jewish play commissioned by or written for Herod. Pseudo-Orpheus wrote the Testament of Orpheus with a monotheistic content of the poem at the expense of a Greek literary icon. He mentions the recensions and additions to the poem which also exhibit a deep knowledge of Greek literary culture. Pseudo-Orpheus enrobed Jewish ideas and values in Greek literary garb. The Sibylline Oracles 1-5, written in hexameter over multiple centuries and different geographic locales are thought to be written by Jews having a monotheistic teaching. One sibyl is depicted as a daughter-in-law of Noah speaking forward of future events. They are written in discursive verse addressed to the world in general in contrast to non-Jewish Sibylline Oracles and cover Jewish ideas of morality. The Pseudo-Greek poets demonstrate how some Jews attempted to negotiate space in the Greek culture.

He then covers didactic literature of Aristobulus, the Gospel of Thomas, and Philo of Alexandria. Aristobulus was a traveling philosopher, knowledgeable about two worlds of thought and competent to bring them into dialogue although the appearance is he tried to reframe Judaism as the influencing culture. He defended the many layers of the text regarding Moses. He presented Jewish ideas in a way that his Greek readers would resonate with. Pseudo-Phocylides written in rough dactylic hexameter from the First Century BC offered wisdom blending Greek and Jewish ideas which heavily relies of the LXX for Sentences to edify and educate the Jewish community by a highly acculturated Jew. The Gospel of Thomas is a collection of 114 ‘secret’ sayings attributed to Jesus written in the Fourth Century. Philo of Alexandria is the best-known Jewish philosopher who subordinated Greek ideas and authors to their Jewish predecessors evaluating genres in terms of representing the world and God’s creation accurately. He used allegorical commentary as did other philosophers. He used the question-and-answer format although he was not the first as well as a lemma followed by an explanation. Other philosophical commentaries are reviewed such as Galen who allowed an author to interpret himself is a method of his exegesis, Hipparchus of Nicaea which is a critical discourse, and examples from the Qumran community which exhibit a pesher interpretation of authoritative text.

Adams then addresses Jewish philosophical treatises. The Letter of Aristeas was written in the Second Century BC in which the narrator, Aristeas, a non-Jew writes to Philocrates to inform him about the Jewish people. Though there has been wide debate, the author takes the position it is within the genres of history, letter writing with the use of the vocative and philosophy. The questions by the Greeks and answers by the Jews reveal the Greeks to be in need of tutelage. The text includes the origins of the LXX. The pursuit of culture is said to be the highest good. Fourth Maccabees was likely written in the First or Second Century and deals with the ability of reason to subdue the passions with Jewish characters representing virtue and Greek characters vice. It includes rhetorical devices, philosophical and narrative elements define it as having multiple genres. Philo’s De Vita Contemplativa is included and note that Philo presented his work as a scientific treatise as developed by Aristotle with a strong critique of Greek culture in a moral philosophy. Josephus’ Against Apion, a two-volume treatise defends the Jewish people from outsider accusations in an apologetic discourse. The Pseudo-Clementine Homilies date to the Fourth Century includes humor and satire and fits into the genres of novel and philosophy.

The Pauline letters are addressed and it is noted that his expressions have parallels with both Jewish and Greek practices. Other letters, Hebrews, James, 1 and 2 Peter, 1, 2 and 3 John and Jude. He points out that Hebrews uses first-person plural pronouns to connect with his readers in both letter and sermon type genres. Other Jewish expanded letters include Baruch, Epistle of Jeremiah, 1 Enoch, 2 Baruch are briefly discussed.

Jewish Novels are discussed although there is not a unified corpus with a common perspective, purpose or set of principles. These include Joseph and Aseneth dated to a Second Century BC date with parallels to Greek novels and rewritten Scripture with a starting point from Scripture. Artapanus is a Jewish author who wrote between 250 and 50 BC. His writing suggest he was familiar with the LXX and not the Hebrew Scriptures and his work falls into the genre of historiography with some novelistic elements. Third Maccabees likely composed in the First Century BC and describes the oppression of the Jewish people in Egypt by Ptolemy IV Philopater and their supernatural release. Scholars have recognized parallels between 3 Maccabees and Esther in a unique example of blending Jewish and Greek historiography. Septuagintal additions (Susanna, Bel and the Dragon) Both are associated with the book of Daniel. Both engage with the genre of satire.

Jewish Historians and Biographers are reviewed including Eupolemus, Pseudo-Eupolemus, Pseudo-Hecataeus, Demetrius the Chronographer, 2 Maccabees and Jason of Cyrene, Josephus and the writers of the Gospels and Acts: Mark, Matthew, Luke, and John as well as Philo of Alexandria. Eupolemus blends Jewish and Greek historiographic practices. He chose to engage his reader in Greek possibly for a wider audience. Pseudo-Eupolemus appears to participate in the genre of Hellenistic historiography to recast the Abrahamic narrative. Pseudo-Hecataeus used prototypical ethography in his writing. Demetrius the Chronographer had a strong chronological focus like the question as to how 12 children be born to Jacob in seven years and represent an Alexandrian scholastic tradition. 2 Maccabees and Jason of Cyrene as an epitome has proven hard to fit in any genre. Josephus is the most important Jewish-Greek historian with history as the most common genre in his work.