Hays, Richard B. Echoes of Scripture in the Letters of Paul. Yale University Press, New Haven, 1989. 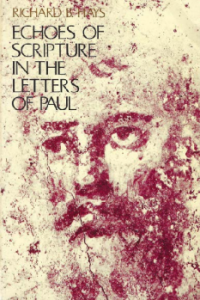 Hays begins defining Paul as a First Century Jewish Christian seeking to come to terms hermeneutically with his Jewish heritage. He uses an intertextual approach to examine Paul’s letters. He explores the hermeneutical significance of reading Paul as a Jewish believer in Messiah whose Bible was Israel’s Scripture and follows the intricate hermeneutical paths along which he takes his readers. Is there a method or hermeneutic that can account for Paul’s exegesis?

Has asserted that rabbinic Midrash offers the proper historical background which Paul is to be understood.  He lists three ways the appeal to Midrash explaining Paul has been made:

2—Midrash as a hermeneutical method using the standard rules.

3—Midrash as a hermeneutical license.

Paul’s writings must be read with intertextuality and the author focuses on his allusions to and citations of specific texts. He refers to these as intertextual echoes and recognizes echoes and cultural memories are often seen in poetry but these must be called attention to so that others may hear and an account must be given of the distortions and new figuration generated.

In the process of examining Paul’s echoes of Scripture, and learning the discipline of tuning our ears to the internal resonances of the biblical text he defines terms including metalepsis—a whispered or unstated correspondence with a text entailing the recovery of the transumed (suppressed) material.

He points out the echo of Job 13:16 with Philippians 1:19 which framed an apologia for Paul’s imprisonment in Philippi and that the preface of Philippians 1:19 only occurs in the LXX in Job 9:28, 19:25, 30:23. Among the  questions that Hays asks is “who has ears to hear the echoes and construe their significance?’ Metaleptic effects require the reader to uncover suppressed intertextual connections to complete the text’s sense. The  validity of metaleptic effects is complex and relies on significant elements of the writer and his audience as  well as past and present, held together in creative tension with “a fresh imaginative encounter with the text,  disciplined and stimulated by historical exegesis.”

Among other characteristics, echoes have thematic coherence and bring a satisfying sense to the text. Hays asserts that Christian tradition has distorted Paul’s voice or missed its undertones and the critical discernment of echoes a process of reclamation. We are not hearing the faint music of the Hebrew Scriptures reverberating all around us.

Has addresses the question as to the “agglomeration” of “holy texts” in Romans, at times authoritative and at other times seemingly allusive and indirect but they converge together. At the outset, he makes the hermeneutical assumption that Romans is most fruitfully understood when it is read as an intertextual conversation between Paul and the voice of Scripture, an older and more compelling partner than his Roman audience! He brings the eschatological vision with an apocalyptic announcement of the faithfulness of the God of Israel.

Hays deals with Scripture quotations that seem to have a semantic inversion that is tethered to their original meaning by Scripture itself. He addresses the quotation of a single verse that points to an allusion of the entire chapter and to hear the full range of echoes, for example, a psalm as a whole must be listened to. Paul’s structure recapitulates the narrative of what he is alluding to in a textual grandparent way. Hays attributes this to a subconscious cause rather than stating Paul was following an established methodology despite recognizing the resonances are complex. He mentions intertextual echoes form bridges between paragraphs that seem disjunction from each other with both theological and aesthetic implications.

Hays points out that Paul used Jewish exegetical tools such as gezerah shawah. He does lament that some echoes in Romans, particularly those of Isaiah 53 are not drawn out into the open for a reason unknown. He points out Paul’s explanations in Romans are a pesher-style. He introduces the concept of a “link-word.” He also shows how Paul changes a word or the tense within a quote to show an accomplishment rather than anticipation. He points out the etymological relationship of words and their interplay that Paul uses to link verses together. Hays doesn’t admit to Paul’s intention but states it is inadequate to say Paul merely drew out of a pool of lexemes but his words carry weight acquired from the earlier narratives. He also mentions that  Paul linked passages together because of the presence of a single word, such as mercy, in the passages and  Paul is interpreting Scripture in his letters.

Hays shows that Paul uses “textual substitution” almost to catch the reader ready to finish the verse but substituting another linking them together. He also shows Paul used “textual overlay” to achieve a polyphony  in his intertextual fusion which is allusive in character but occurs in “the cave of echo.”

The author states that Paul’s reasoning is not only metaleptic but elliptical—requiring the reader to fill in some obvious missing steps. He also realizes that Paul, although quoting the LXX relied also on the Hebrew subtext and some echoes are “entombed” there. The foundation Paul uses then is “laden with significance.”

He shows Paul used affixation in word-formation. He points out Paul used qal wahomer in 1 Corinthians 10:7- 11 and dissimile in 2 Corinthians 3:12-18 and metaphor there among other places. He makes the astonishing statement that “the new covenant’s hermeneutic is not a theory of interpretation, not an inventory of interpretive procedures like the rabbinic middot”…but a true reading with moral transformation illuminated by the Holy Spirit allowing Scripture to echo in his letters.

In the final chapter Hays states that Paul “adheres neither to any single exegetical procedure nor even to a  readily specifiable inventory of procedures.” He states that “there is no evidence in the letters that Paul ever sat down with the biblical text and tried to figure out what it might mean by applying an exegetical procedure abstractable from the particular text that he was reading. He contends that Midrash, typology, and allegory offer insufficient power of discrimination to probe the distinctive properties of Paul’s interpretation. He concludes however that Paul’s interpretive methods are paradigmatic for Christian hermeneutics.