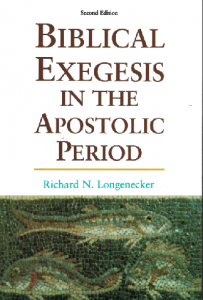 In this Second Edition this classic the author prefaces his work with new material regarding 1st Century exegesis. Longenecker points to books by Richard B. Hays (Echoes of Scripture in the Letters of Paul) and Michael Fishbane (Biblical Interpretation in Ancient Israel). “Parallel texts” and the “dense occurrence of terms…that become ‘reorganized’ and used in ‘a natural form’ is a consideration when dealing in the Jewish exegetical tradition. The phenomenon of quotations and allusions is an important consideration in Longenecker’s treatise. He notes the need for cooperative interaction between Jews and Christians. The book synthesizes the hermeneutics of Early Judaism guided by proper constraints. He rightly examines the quote of Psalm 68:18 several times in the book and the reversal of its meaning in Ephesians 4:8 but misses the allusion to Ecclesiastes 5:19 possibly by discounting the importance of the LXX of “not of major significance in determining the exegetical practice of 1st Century Judaism” (although later in the book mentions the similarity between the Hebrew verbs “to give” and “to take”) in answering the question, “Can we reproduce the exegesis of the New Testament?”

The book is dedicated to those interpretive methods. He considers the Targums, the Mishnah, the Gemaras and Midrashim (although later than the 1st Century), apocalyptic writings, pesher commentaries found at Qumran and Philo of Alexandria. As far as Midrash is concerned, the terms Peshat and Derash are discussed and he points out that it should not be assumed they were present in the earlier 1st Century. He discusses the principles of Hillel which predate Christianity and reviews his 7 middoth of exegesis.

He points the reader to Birger Gerhardson’s definition of Midrash:

“Midrash is normally composed out of already-existing material, accepted as authoritative because it comes from the Scripture or the tradition. Using this raw material, the new is evolved. Naturally new terms, new phrases, new symbols and new ideas are introduced but the greater part is taken from that which already exists in the authoritative tradition. Midrash starts from a text, a phrase or often a single word; but the text is not simply explained–its meaning is extended and its implications drawn out with the help of every possible association of ideas.” (Birger Gerhardsson. The Testing of God’s Son (Matthew 4:1-11 and PAR.): An Analysis of an Early Christian Midrash. Lund: Gleerup, 1966, 14.)

In Jesus’ use of the Old Testament (39X, 14 allusions) Longenecker points out that there is an overlap between quotation and allusion. He mentions that Jesus’ quotations are mostly from the LXX although with variations. He points out that a great deal of work remains regarding these variations. He questions the origin of the textual variations of the sayings of Jesus used by the Gospel writers and he notes that midrashic syllogisms played a part in the teachings of Jesus. He also used exegetical middoth such as qual wahomer and gezerah shawah and outclassed the Pharisees on their own exegetical grounds. He also used a pesher interpretation as was used at Qumran, most often quoting Isaiah but also the psalms, Jeremiah, Zachariah and Malachi.

Longenecker points out the ministry of the Holy Spirit in the interpretation of Scripture in the lives of the disciples and Jesus “transformed the pre-messianic Torah into the messianic Torah.”

He also points out that the source of quotations in the New Testament is the LXX but the LXX alone is not sufficient to explain all “their textual phenomena” and that has not been resolved and should be unresolved until additional evidence is available. He notes that some quotes from the LXX directly apply to the Messiah whereas others only tangentially do so. He proceeds to explain an appreciation of the exegetical practices of the 1st Century a necessity.

He takes the position that Christian writers used pesher (“this is that” in prophetic fulfillment).

Longenecker then addresses how Paul sought by midrashic explication a Christological significance and his treatment of biblical text that of Pharisaism following the Greek hermeneutics of the Mishnah. His variant textual readings are thought to be due to his rabbinic training among others and his introductory statements stylistic only

He mentions Paul’s “pearl stringing” highlighting analogous words or phrases as the basis of their being brought together. He goes through most of Hillel’s middoth giving Pauline examples of each. He suggests Paul’s textual variations are pesher (“this for that”) but sparingly so.

He covers the use of the Old Testament by the Gospel writers which feature an eschatological fulfillment treating each writer individually. Of note he mentions John paid particular attention to the Jewish festivals.

He spends a chapter discussing the relationship of Hebrews to the Old Testament opining that the author was versed the LXX but had no knowledge of the Hebrew version of the Tanakh. He points out the use of Hillel’s principles.

He then turns his attention briefly to James, 1 and 2 Peter, 1, 2 and 3 John, Jude and Revelation with some midrashic qualities of 1 Peter.

He concludes by stating that the Jewish roots of Christianity make it a priori likely that the exegesis would resemble that of Judaism of the time. But he suggested that we not try to attempt to reproduce the writers’ midrashic handing of the text…or Jewish manner of argumentation.