Have you ever been a part of something much bigger than yourself not only in ability but in years? Someone long ago started something and now you, possibly with the help of another person are carrying the baton. Now imagine the person that had started that something had prayed for you not knowing you but understanding that something would continue throughout the ages to you.

That is what The Institute of Midrashic Studies of the New Testament is about. In the First Century Saul of Tarsus, a student of Gamaliel, and whose name was changed to Paul wrote fourteen letters that were later included in what would be known as the New Testament. We now know that at least seven of those letters are complete Midrashim of the Hexateuch and the book of Isaiah.

What is a Midrash? A good description was written in the 1960s:

“Midrash is normally composed out of already-existing material, accepted as authoritative because it comes from the Scripture or the tradition. Using this raw material, the new is evolved. Naturally new terms, new phrases, new symbols and new ideas are introduced but the greater part is taken from that which already exists in the authoritative tradition. Midrash starts from a text, a phrase or often a single word; but the text is not simply explained–its meaning is extended and its implications drawn out with the help of every possible association of ideas.” (Birger Gerhardsson. The Testing of God’s Son (Matthew 4:1-11 & PAR.): An Analysis of an Early Christian Midrash. Lund: Gleerup, 1966, 14.)

Although the Pauline style has been known to be midrashic for decades, it has only been recently that the extent of the Jewishness of his letters has been found. The prolific Jacob Neusner wrote in 2005:

“If by Midrash we mean free commentary on biblical texts through narrative expansion, quotation of masters of the past, and diverse forms of reasoning, there is no Jewish text written in Greek that is in every respect midrashic.” (Neusner, Jacob, Avery-Peck, Alan J. Encyclopaedia of Midrash. Biblical Interpretation in Formative Judaism. Volume One. SBL Press, 2005, p. 199.) 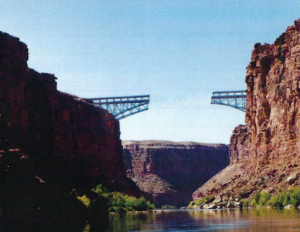 Since the 1950s scholars have been searching for the continuity of thought in Jewish religious writings between the Second Temple Era (561 BC to 70 AD) and the Second Century. Much of the writings must have been burned during the destruction of Jerusalem in 70 AD. So Jewish scholars have been looking at the New Testament for clues as to this thought process. Consider it a bridge building effort over a gorge with a mighty river below.

On the other side of the gorge is another group of people, Christians, who are discovering midrashic thought processes in the New Testament. Their side of the bridge is much less developed because the methodology of Midrash and concepts of Jewish hermeneutics are foreign to them. In fact, only a few Christian Seminaries in the United States have a section or department dedicated to Jewish studies.

That is where we find ourselves today. We have begun to write scholarly articles about The Oldest Midrash that was completed by Paul before his death on June 29, 67 AD. We are hoping to bring Jewish and Christian academicians more closely together on the same bridge of biblical hermeneutics. We have enlisted fellows from Christian seminaries internationally, giving them a generous stipend to assist with schooling, writing four papers each during the year. Their papers will include difficult subjects that Paul covers in his Midrash using the principles or middoth of Hillel.

Help us, Gidon Ariel, an Orthodox Jew, and J. David Pitcher, a retired orthopaedic tumor surgeon and Christian, in this important bridge building effort that God has placed in our hands for our generation by generously donating to the charitable organization Root Source, the fiscal supporter of this end-times initiative.