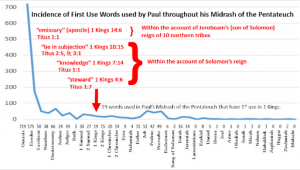 likelihood that Paul would use 4 different first use words from 1 Kings is quite low and requires examination.

Paul identified himself as an “emissary” (apostle). That term is only used once in the LXX (1 Kings 14:6) describing Ahijah the Shilonite, a prophet of Shiloh (1 Kings 11:29; 14:2) who the Lord spoke to at the time of Solomon. His two prophecies predict the rending of the ten northern tribes from Solomon (1 Kings 11:29-39) and the death of Jeroboam’s son, the end of Jeroboam’s house and the winnowing of Israel on the other side of the river because of Israel’s disobedience (1 Kings 14:7-20).

Paul keeps the reader in 1 Kings by the use of the word “knowledge” in now what can be seen as Pauline in style. In the first use of the word “acknowledgment” in the LXX is in 1 Kings 7:14, when Solomon found Huram from Tyre, the son of a widow from the tribe of Naphtali and whose father was a Gentile bronze worker. Huram himself had “skill” in working with bronze. Huram made the two pillars of bronze in front of the Temple outside of Solomon’s Porch.

Paul take the reader right back to 1 Kings again by using the word “steward”, a word that is used first in 1 Kings 4:6 to describe Ahishar (“my brother is a song”), the manager of Solomon’s house. He is only mentioned here and nothing else is known about him. That is sufficient, though as the blameless steward of God is semblative to the mighty man of valor of Joshua 1:14-18. Also note that the meaning of Ahishar’s name points to the word “brethren” used twice (on either side of “mighty men of valor”) in Joshua 1:14-15. 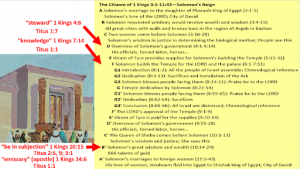 Later in Titus Paul used the verb “be in subjection” which has its first use in 1 Kings 10:15 describing the tribute brought to King Solomon from merchants, kings and governors in submission to Israel’s king.

So is there cohesiveness in what Paul doing? How are these three words connected?

From Dorsey’s work (The Literary Structure of the Old Testament, p. 138) the center point of 1 Kings 3:1-11:43 is the dedication of the Temple by Solomon.

In Titus 1:1-2 Paul wrote in what has become known as “the trilogy of faith”: “Paul, a servant of God and an emissary of Yeshua the Messiah, according to the faith of God’s chosen ones and the knowledge of the truth which is according to godliness, in hope of eternal life, which God, who can’t lie, promised before time began.” Through Midrash Paul has defined the trilogy as faith, knowledge and godliness within the life of the believer in Yeshua the Messiah, a vertical relationship with God and a horizontal relationship with fellow man and that the believer is a Temple of God, dedicated to God. Paul’s use of four words from 1 Kings cohesively through Midrash reiterates 1 Corinthians 3:16: “Don’t you know that you are a temple of God, and that God’s Spirit lives in you?”