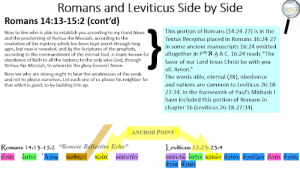 Can Paul’s Midrash of Romans help to determine if the Textus Receptus is correct in placing the four verses in Romans 16:24-27 (in some ancient manuscripts 16:24 omitted altogether in P46 a A B C. 16:24 reads “The favor of our Lord Jesus Christ be with you all. Amen.”)? Or should the verses be placed in Romans 14:24-27 as in other manuscripts?

In the Midrash there are eleven common words (Lord, with, all, is able, according to, obedience, to, nations, God, through, whom, into) five of 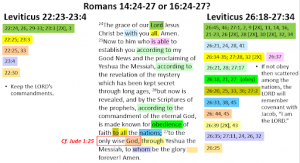 But how do the ideas of each section of the Source Text line up with the four verses?

The only idea in the earlier passage in Leviticus that seems to be related to the passage in Romans is to keep the LORD’s commandments whereas the later passage uses the word “obey” and if the children of Israel didn’t they would be scattered among the nations. Additionally the LORD would remember the covenant he made with Jacob as well as the “I am the LORD” which connects with Yeshua the Messiah. 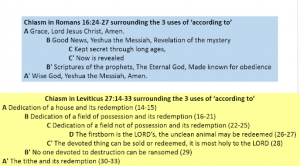 For these reasons, it appears, through the tool of Midrash that the Romans passage appropriately belongs at the end of Romans in chapter 16.

Note that the phrase “only wise God” is also used by Jude although the Complutensian Polyglot Bible omits the word “God”.

An examination of the structure surrounding the use of the common word ‘according to’ in both the Source Text and the Midrash adds credence that the four verses belong at the end of Romans 16. Both have a structural chiasm. Combining the Center Point for both is a revelation: Yeshua is the firstborn of the LORD’s, the unclean may be redeemed and it has been a secret kept through the ages but now revealed.