One of the features of Midrash is linking two or more passages of Scripture together. This often happens when two passages are used sequentially but can also occur when one passage in the commentary is used to explain another. You may have heard the phrase “string of pearls” used to describe this by Christian commentators.

Middot (“measures”) in Jewish hermeneutics are principles used to interpret Scripture. Within these principles are the Seven Rules of Hillel. One Scriptural passage serves as a basis for interpretation of another passage, constructing a family on the basis of one passage (binyan av mi-katuv ehad) and is Hillel’s third rule of exegesis. 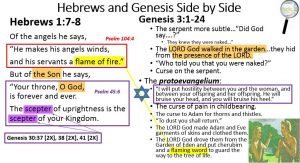 In Hebrews 1:7-8 there are three Greek words in common with the Greek translation of the Hebrew Scriptures, the Septuagint (LXX). Paul linked Psalm 104:4 with Psalm 45:6 and through Midrash both verses are linked to Genesis 3:15, the protoevangelium. The one who stationed angels to prevent man in a sinful state from eating from the Tree of Life and living forever in a sinful state is the same one whose throne is eternal with an upright scepter of his Kingdom is the same one who fulfills the promise to Adam and Eve. All these are linked to who Paul is talking about: Yeshua the Messiah.

This type of reasoning is termed “transitive logic”. We often see this in mathematics where we reason that if A=B and B=C then A=C. The concept of transitivity was described by the Greek mathematician Euclid of Alexandria who lived from 325-265 BC in one of his “common notions”. In English his logic is stated “things that are equal to the same thing are equal to each other.” This is a common Hellenistic concept that Paul uses often in The Oldest Midrash.