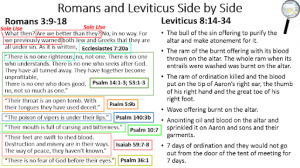 The phrases “no one” and “no not one” are within Psalm 14:1-3 but not the word “righteous”. So how could Paul have written “as it has been written” about this phrase in Romans 3:11?

Is there a place in the LXX that records the first part of Romans 3:11 with the word “righteous”? It is possible Paul is referring to the first use of the 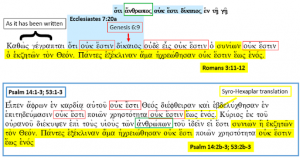 word “righteous” in Genesis 6:9 referring to Noah? Or perhaps Paul is alluding to Job’s words in Job 9:2 “In truth I know that it is so; for how shall there be a just mortal before the LORD?” It does not appear that it has been recognized that the phrase is a quotation of Ecclesiastes 7:20a excluding the word “man”, a word which is used in Psalm 14:2/53:2. Note the English translation of the Greek of the LXX in Ecclesiastes 7:20:

For there is no just man on the earth who shall do good and shall not sin.

The context of Ecclesiastes 7:20 amplifies as a preface the contexts of the other six quotations and its use emphasizes that “there is none righteous” ‘has been written’.

Through Midrash Paul links seven Scriptures to Leviticus 8:14-34 including: the bull of the sin offering to purify the altar, the ram of the burnt offering whose blood was thrown upon the altar, 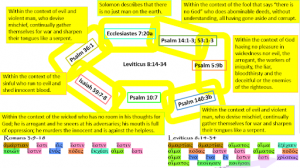 the ram of ordination with blood put of the tips of the right ears, thumbs of right hands, great toes of the right feet of Aaron’s sons, the unleavened cake as a wave offering burnt and burnt together as an ordination offering, the breast as a wave offering as Moses’ portion of the ram of ordination, and then the anointing oil sprinkled and blood on the altar sprinkled upon Aaron, his garments and his sons and his sons’ garments, the seven days of the ordination including boiling the flesh at the door of the tent of meeting and eating the bread, the LORD making atonement for them.

All seven quotations of Scripture in the LXX in this section of the Midrash describe the depraved nature of Mankind and are directly related to the need for the High Priest and the need for atonement.