The very first thing that is noticeable in the section of the Midrash/Source Text Ephesians 1:10-14/Isaiah 5:30-7:25 is the uncommon word “administration” (oikonomia). It is only used twice in the LXX in Isaiah 22:19, 21 and only 3X in Ephesians in 1:10 and 3:2, 9. The use in 3:2 coincides with the uses in Isaiah. Why did Paul use it here? (The other New Testament uses are Luke 16:2-4; 1 Corinthians 9:17; Colossians 1:25; 1 Timothy 1:4.) Note that its use here is associated with the promise that a virgin shall conceive and bear a son, Immanuel. The second use is associated with Eliakim receiving the keys of David. When we get to the third use we’ll make an amazing discovery. In that section of the Midrash Paul describes who Eliakim foreshadows. 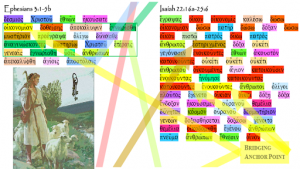 Through Midrash, Paul connects Isaiah 6 with Isaiah 22 recording that Isaiah saw the Messiah at a time when the keys of David had been given to him.

In the section of the Midrash/Source Text Ephesians 3:1-5b/Isaiah 22:16a-25:6, Paul twice used the word “mystery” (mustērion) of Messiah (related to the word “establish” [stērizō] in Isaiah 22:25), a word that is only used in the LXX in the book of Daniel (2:18, 19, 27-30, 47 [2X]; 4:9). The double use (Ephesians 3:2, 9) of the uncommon word and Bridging Anchor Point “administration” has its sole (and double) use in the LXX in Isaiah 22:19, 21 describing how Isaiah prophesied that the key to the house of David will be taken away from Shebna (whose father is not mentioned and whose name means ‘grow” as compared to Shebaniah [cf. 1 Chronicles 3:21-22; Ezra 8:3, 5; 10:2; Nehemiah 3:29; 6:18; 12:3] meaning YHWH has grown implying Shebna means ‘grow without God’ essentially ‘self-reliant’), the steward of the palace that had built himself a tomb near the royal tombs and gave it to Eliakim  (meaning “God of raising”) to be clothed with Shebna’s robe and belt, committing the government into his hand to be a father to the inhabitants of Jerusalem, and to the house of Judah to be fastened like a nail in a sure place and to be a throne of glory to his father’s house, laying on his shoulder the key of David’s house and he will open, and no one will shut; he will shut, and no one will open. “‘I will thrust you from your office. You will be pulled down from your station. It will happen in that day that I will call my servant Eliakim the son of Hilkiah, meaning “portion of Yah”) and I will clothe him with your robe, and strengthen him with your belt. I will commit your government into his hand; and he will be a father to the inhabitants of Jerusalem, and to the house of Judah.” Through Midrash, Paul identifies Yeshua the Messiah as the ‘God of raising’ and the holder of the key of the house of David (cf. Revelation 3:7-8).

In the section of the Midrash/Source Text Ephesians 3:5c-11/Isaiah 25:8-27:18, the relatively uncommon word “hidden” (apokruptō) was used by Paul having a single use in Ephesians (3:9) and only two uses in Isaiah (26:20; 40:27) and is an Anchor Point for his commentary on Isaiah. The word has its first use in the LXX in 2 Kings 4:27 when the birth of the Shunammite woman’s only son was foretold by Elisha but his death was concealed from him. Elisha raised the boy from the dead. This is the very context that Paul used the word and describes the mystery of Messiah that was planned by God from the beginning of the world. Paul drew the commentary in Ephesians from Isaiah 26:19-21. 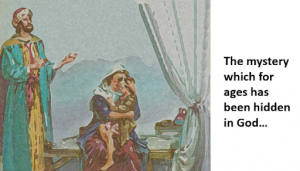 “The dead shall rise up, and the ones in the sepulchers shall be raised, and the ones in the earth shall be glad, for the dew by you is a cure to them; but the land of the impious shall fall. Proceed, O my people! Enter into your inner chambers! Lock you door! Be concealed a little! As much as this, as much as that, until whenever the anger of the Lord should go by. For behold the Lord brings anger from the holy place upon the ones dwelling upon the earth; and the earth shall uncover her blood, and shall not cover up the ones being done away with any more.” (Isaiah 26:19-21, LXX)

Through Midrash, Paul is linking the Resurrection of Yeshua whose birth was foretold by the prophets (but his death and Resurrection were concealed) to the Rapture and the Tribulation. He is the God of raising and his is the administration of the mystery which for ages has been hidden in God. (Cf. Hebrews 10:26-12:11/Genesis 35:22b-45:28; 2 Timothy 2:7-26/Numbers 13:21-21:9.)